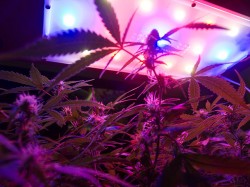 They operate more efficiently than other types of grow lights

For many indoor gardeners, it is important to use equipment that that is environmentally friendly.  In the case of grow lights, that means using LED grow lights.  Why?  Because of the lower demand for power that LED lights have.  They operate more efficiently than other types of grow lights, producing more useful light for the same amount of electricity when compared to conventional grow lights.

Plants don’t use the entire spectrum of natural lights that falls on them.  They have evolved to require only certain, very specific parts of the spectrum.  They use some of the red-orange range of available light to power photosynthesis, the process by which they produce food for themselves.  They also use part of the blue-violet range for reproductive purposes such as blooming and creating seeds.  Other than these, plants use little of the rest of spectrum.

Conventional grow lights produce light over a large range of the spectrum. They are unable to do otherwise, and this where LED grow lights really shine so to speak.  Research and development has now brought us to the point where engineers are able to design LED lights that only emit light over very select frequencies.  This is accomplished by using differing semi conducting materials.  For a more complete explanation, Wikipedia has an extensive article on the subject of LED lights.

The advantage in being able to closely control the color of the light that is produced by an LED is that energy is not wasted producing unwanted light frequencies or colors.  So, while an LED is using electricity to produce exactly the colors of light that a plant can make use of, it’s conventional grow light counterpart is wasting electricity producing the desirable light, plus a lot of other colors of light that are not useful for pant growth or reproduction.

Outdoor Chandeliers: Adding Class and Elegance To Your Home

Valances can enhance your home with genuine style