Open Walk In Showers Without Splash 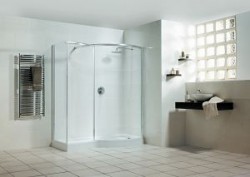 Some reasons why people may opt not to go with wet-rooms or walk in showers is because they fear having water all over the bathroom. Many homeowners want an open area for the shower as a deign feature, but don’t want to give up having a dry area that never gets splashed. How can a walk in shower be constructed in such a way as to be open and still not splash or spray water into other areas? Let’s take a look at what professionals say about building showers without doors.

1. Walk in showers and wet rooms can be WET spaces that are completely open or semi-wet. Most people will go for a semi-wet design that allows for a dry space within the bathroom. Instead a tiled floor that’s graduated toward a central drain in the room, separate the actual shower area and place a drain under the overhead rainfall showerhead or power shower head, so that the water remains contained under the shower itself. Even if you don’t use doors, the floor can have a lip to keep water inside a specific area (best if angled in a corner). It’s also important to situate your power shower head so the main spray falls down or across where splashing isn’t an issue. Consider placing the showerhead on a pillar instead of a wall. But always, install the head or manual device or console showerhead to face the back wall or to the side, not out into the room.

2. Whether you have a large console power shower head that has dozens of settings and a massager, or a soft rainfall panel inset into the ceiling, the angle of the floor is extremely import. To avoid pools or water collecting where they aught not, the drainage must be engineered to slope gradually below the shower. A bathroom can have an open doorlesss area yet have space that never gets wet (not more than what damp bare feet track around) if all three of these elements are finished with care: (a) choose the showerhead placement wisely; (b) slope the floor toward a single drain under the shower; (c) consider adding a small lip around one area to contain pooling.

How to Replace a Bathtub for Your Home Bathroom

Instances Where an Extra Long Shower Curtain Liner is Good For

How to Build a Shower Set Up for Your Home Bathroom