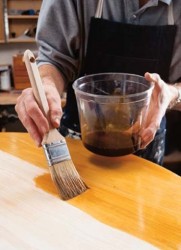 Shellac was used to polish turned wood articles in India and Europe by simply rubbing solid sticks of the material on the spinning stock until it melted by the heat of friction.

Many purely natural polymers were traditionally used to manufacture small objects by moulding and pressing.Such material is used to produce plastic drawer slides. Horn and turtleshell are quite thermoplastic and were die-pressed into complex shapes such as decorative snuff boxes. When used as thin veneers they could be made to conform to mouldings or turned pilasters by gluing under heated cauls. Most natural resins are also thermoplastic.

Shellac was used to polish turned wood articles in India and Europe by simply rubbing solid sticks of the material on the spinning stock until it melted by the heat of friction. This use apparently predates its use as a solvent varnish. Some of the most extensively employed early thermoplastic materials were various compositions used to imitate carved detail on picture frames in architectural interiors. This craft saw its heyday during the late eighteenth and early nineteenth centuries when ‘composition’ ornament makers used mixtures typically consisting of rosin, linseed oil, animal glue and whiting to mould-press elaborate sculptural detail.

Ornament made from ‘composition’ was popularized in Britain by the Adam brothers in the last quarter of the eighteenth century. Their fine and repetitive style of decoration was difficult and expensive to reproduce by the traditional method of carving in wood so they introduced a way of manufacturing their designs more cheaply from composition pressed into reverse-carved moulds. This method of ornamentation was used extensively throughout the nine-teenth-century for picture frames, furniture and interior decoration.

Gutta-percha, a natural latex tapped from trees native to Malaysia, was first brought to European notice in 1843. It was used to manufacture picture frames, book covers and various other decorative and useful objects during the Victorian era. Although chemically identical to natural ‘India’ rubber, it was rigid at room temperature and mouldable at around 90 °C. In fact, natural rubber and gutta percha are the cis and trans isomers respectively of polyisoprene. Imitation woods made from ground coconut shell or other wood dusts mixed with gutta percha could be mould formed or worked by standard woodworking techniques.

The Best Mattress to Buy Today

Keeping Clothes Out of the Bed and into Wardrobe Bedroom Furniture

How To Save Money With Folding Chairs