The History of the Roll Top Desk 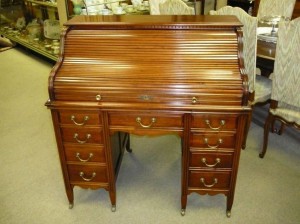 It is said that the original roll top desk apparently appeared in 1829, even though it was patented only somewhere around the mid nineteenth century. This type of desk is basically characterized by a roll down cover, although this feature evolved significantly over the years.

Almost every roll top desk also features a number of small cubbyholes, drawers and shelves. These are mostly hidden from the view when the top is rolled down, giving a neat and uncluttered appearance. The roll down cover of the roll top desk was usually a series of closely held wooden slats that followed the curved track from the top to the bottom of the desk.  This roll top could also be locked when it was down, maintaining the privacy of the owner.

In the nineteenth century, where correspondence was a part of day to day life, roll top desks became a very common feature in many homes. They had shelves and drawers made for easy storing of old correspondence and writing and posting material like fresh paper, ink, envelopes, stamps, etc.

Eventually, three main types of roll top desks appeared. There was the curved desk, namely the Tambour, where the cover moves from the center to the left and right, instead of top to bottom. Then, there was a version which did not actually have a roll top and had slender legs instead of drawers on the side. And, then there was also a combination of the two, which basically had a roll top, but sat on slender legs instead of drawers.

The popularity of this desk began to diminish when desks made out of other materials, which were cheaper and sturdier, started appearing in the market. However, they are still in production today and there are still quite a few antique ones around as well.

The Three Main Types of Projectors