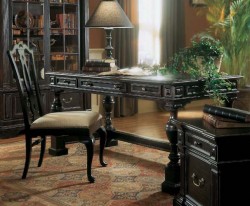 A Queen Anne writing desk is one of the more common and lovely furnishings constructed in this elegant style. “Queen Anne style” can refer to more than one era in design and architecture. In England, Queen Anne refers to works constructed during the reign of Queen Anne (1701-1714). This is a restrained form of European Rococo with heavy Dutch influences. In America, Queen Anne is a Colonial style, popular from 1725-1750 – 60. In both cases, the style is delicate, curvilinear and modest. Modern furnishings constructed using typical Queen Anne features are still being manufactured.

Several features are characteristic of this style such an S-curved cabriole leg designed to mimic the legs of an animal, which allows a relatively slender leg to support a quite heavy surface. Pulls are ornamented with a batwing plate rather than the earlier teardrop shape. The style is smaller and more graceful than its predecessors, the American version being even less ornate than its English equivalent.

Such furniture made use of beautiful, richly finished and carved woods, such as walnut being the most commonly used, also cherry and maple. Towards the end of the period, mahogany began to be imported into America. An exotic foreign wood with a deep brown color mahogany was immediately popular. It was however, quite expensive, so most cabinetmakers continued to use less expensive native woods.

Queen Anne style writing desks were and still are a popular piece of furnishing. Desks or secretaries were necessary form of period architecture, allowing the lady or gentleman of the house to conduct business or social correspondence. Original desks in this style frequently have either a slant top, or an upper chest on frame and, occasionally, the chest on chest style. Modern interpretations of this style are widely available, and can be purchased with one or more drawers below a flat (sometimes removable) tabletop. They may also feature the traditional slant-top, where the writing surface folds down, revealing an interior with pigeonholes and other small cubbies.

Drawers may or may not appear below the larger surface. Some liberties are taken with conventional construction to allow for modern needs such as computers, or access for electrical cords. They can be found in traditional woods like mahogany or walnut. The price will be considerably more if the wooden writing desk is constructed from solid woods instead of wood veneer over a composite wood. Many better furniture stores will offer a variety of beautiful modern replica writing desks that accommodate today’s office needs while maintaining the look and feel of by gone eras. If you are more of a collector who is looking for an authentic period piece then searching in antique shops and auction houses would definitely prove to be a better option.

Glassware considerations for the family home