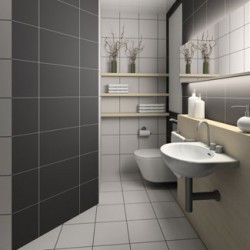 Bathroom ideas are a dime a dozen, you can get a dozen just by surfing the internet. Good bathroom ideas, however, are harder to find than it would seem. People just post online the end product of what their plans would look like, but not actually guide the reader through the step by step process of what an idealized room would like. If you hate those kinds of internet articles, then you’d love this in comparison. Here are a few ideas, from an interior designer nonetheless (that’s moi in case you’re wondering) on how to give you bathroom a definitive black and white themed touch.

Setting Up Your Bathroom with White and Black Bathroom Ideas

Having a small bathroom may seem like a bother for most people, but it shouldn’t be in reality. If you think about it, why would you need an oversized bathroom in the first place? It’s not like you’ll be living in that space or spending more than a few hours per day inside it, nor would it entail you to stay in the bathroom space with other people. A bathroom is not too small to implement small black and white bathroom ideas in as long as you can move comfortably around it. If your bathroom is so crowded that you scrape your elbows when you take a dump, then maybe you do have to remodel a bit. 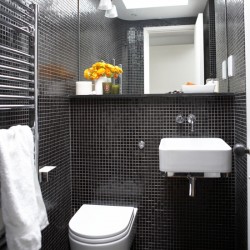 Then again, having a not too large bathroom has its advantages. For one thing, a smaller bathroom is not that hard to maintain. Cleaning your small bathroom would not be that big of a deal because you only have a small area to cover and scrub. Thoroughly cleaning your small bathroom would not take more than a few minutes. A smaller bathroom is also easier to design because you have less space to adorn. You simply have to put in the essentials and a few personal touches to make your bathroom from ‘crowded’ to ‘cozy’.

Black and White Bathroom Tile Ideas and How to Implement Them

Here’s an idea: why not try using multi-colored tiles for your bathroom space? Instead of just purchasing and utilizing an all white or all black bathroom tile schema, try mixing and matching them up. Instead of a checkerboard effect, try using black and white solid walls to balance or even out the room template. appealing. However, if you do like the chessboard effect then you should just tweak some factors to make it acceptable. In both cases, it would be better to use dark hues instead of really blatant black and white tiles.

Having dark and light tiles takes some of the attention off from the size of your room, but that would frankly not be enough. Complement your wall and floor designs with wall mirrors. Utilizing wall mirrors as a decorative and functional bathroom component would do wonders for your bathroom experience. It would create the illusion that your bathroom is actually bigger than how it actually is, and the visual aesthetic of the black and white tiles of your black and white bathroom design ideas being reflected by the mirror is quite a sight, let me tell you. There’s also the functionality of your mirror every time you need to look at your reflection when grooming, but you already knew that. 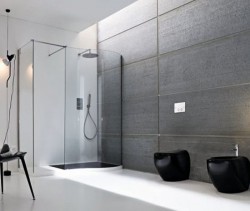 Another crazy idea, which may not have much to do with black and white designs, is to exploit the rule of thirds in your bathroom layout. The rule of thirds is when you take advantage of three factors in order to make a “whole” appear longer (or shorter) than it actually is by tweaking its components. In a bathroom, you usually have three major pieces – the bathing implement, the toilet, and the sink. Some people use four pieces with two bathing implements, a shower and a bathtub together, but that wouldn’t be too ideal if you have a small bathroom with black and white bathroom decorating ideas to work with.

The secret is to separate the components of your bathroom as far apart as possible from each other, but not in equidistant points from each other. Clumping certain components together and putting them at the ends of the room would create large open spaces in the middle which would appear as if the bathroom space is roomy even though it is not. Perhaps you’d want to use contrasting colored bathroom components like black toilets and white sinks, just to get the black and white theme going.

Why You Shouldn’t Learn How to Tile a Shower Floor