There are two types of shower pans; a prefabricated and a custom made shower pan

Often times when talking about a certain setup, the important components get left out. In a shower set up, for example, we always focus on the obvious shower head, the shower curtains or the enclosures, and the tiles whether they be regular sized or mosaic. No one ever talks about the shower pan, which is quite ironic since it serves a very important function in relation to the whole shower set up. It’s like air in a way; no one knows it’s there but people will feel it only when it’s gone.

For those of you who don’t know, a shower pan is the base of a shower set up where we stand on and where the drainage is located. There are two major types of shower pans – prefabricated and custom made. Prefabricated shower pans are those available in department stores that can be installed in your bathroom over the floor and the plumbing. Custom made shower pans, on the other hand, are those types of bases that you create from scratch. There is less effort with the prefabricated variant, but there can be more opportunities for creativity with the custom made type. 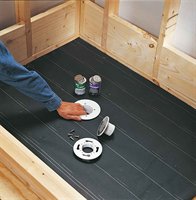 Learning how to build a shower pan, at least for me, is unnecessary because it’s not something you can use over and over again. I mean, besides the fact that there is that prefabricated alternative, don’t you think it’s a waste of time and energy when you could be focusing on your career or spending time with your family? In case of custom made shower pans, why not let professionals handle it so that you don’t have to put your life on hold and you get fantastic results at the same time?

Contracting vs. Learning How to Build a Shower Pan for Tile Custom Bathrooms

Learning how to build a shower pan on a concrete wall would take days out of your normal week. It requires reading, watching of instructional videos, and a bit of practice if you really want to get it right. If you think, though, that you can save money by avoiding a contractor and learning how to install a shower pan by yourself, you have another thing coming. Unlike installing tiles for your bathroom wall or floor, building a shower pan includes basic know how of plumbing and drainage alignment. One mistake can cost you more dollars than hiring an expensive contractor to build a shower pan in the first place.

The alternative would be to hire a contractor who would know how to build a custom your shower pan. Would that be so bad if you think about it? I mean, it’s just a person doing what’s he’s supposed to do and what he’s actually supposed to be good at doing to earn his keep and pay for the living expenses of his own family. Despite our country being in deep economic crises, would you really risk the safety and health of your family with a shoddily installed bathroom pan, just because you want to save a couple of bucks? There’s a difference between being smart and being stingy, and doing something you have no experience in that may potentially put your family at risk is just not smart. 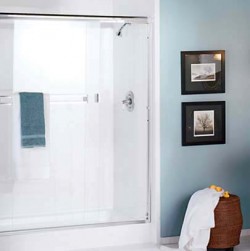 As an interior designer, I believe I have some substantial knowledge on the goings on of most houses in terms of design. I mean, don’t know about you but I myself don’t know how to install a shower wall. Well, maybe because I’m a girl and I have lots of contractor guy friends to do it for me. But still, if it were up to me, I’d either go for a fabricated shower pan or hire a contractor to build a custom shower pan for me. If you have any comments about this article or if you have an funny story regarding how to install a shower pan over wood or if you have secret techniques on how to build a shower floor pan, leave a line on the comments section below and tell us all how you think.

Relax Your Eyes While You Sleep with Black Blinds