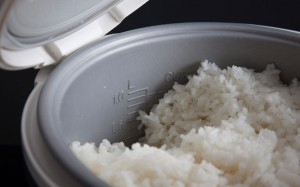 If you want to make rice in a pressure rice cooker then perhaps you should buy a Sanyo ECJ-PX50S. This is the cheapest Sanyo pressure rice cooker that is available for sale in North America. There are other models with a pressure cooking function such as the Zojirushi NP-HTC10 and the Sanyo ECJ-JG10W however these models are actually double the price of the ECJ-PX50S so it represents pretty good value for money.

It has to be said that the more you spend on a rice cooker, the better it will cook rice. But there is a caveat. That is, a rice cooker costing twice as much may not produce rice that is twice as good. However, it will be better. So the question you have to ask yourself is, is it worth it? Now to answer this question you have to think realistically about how much you can afford to spend on a new kitchen appliance. Also, how often are you going to eat rice? The more often you will cook rice, the more advantageous it is to purchase the best rice cooker you can afford. After all, you will be eating the produce on a regular basis.

The reason that the Sanyo ECJ-PX50S is cheaper than the other two machines even though it has a variable pressure control is that it is a conventional rice cooker. The other two use an Induction Heating system which adds quite a bit to the cost. If you want the best tasting rice then perhaps having both would be nicest. But if you want to get a good deal and spend less than $200 on a new rice cooker then the ECJ-PX50S may well be a good one to consider.

It comes with a recipe book, a rice spatula and measuring cup. This is all you need to get started making great tasting rice at home.

Save Money By Fixing Your Dryer Yourself

The Basics of a Home Entertainment Room

Countertop Dishwasher – Useful or Not?