Why Choose a Convection Microwave? 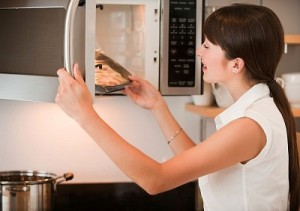 There are several reasons why convection microwaves are such a good choice. The price has dropped over recent years, meaning that they now cost about the same as a regular oven. They also use up to 80 percent less energy than a regular oven – a big savings over the year, if you spend a lot of time in the kitchen.

But of course, you want your food to taste good and food cooked in a convection microwave will generally taste better than food cooked in a regular microwave. A microwave tends to just warm food up and often, the exterior can be cooked, leaving the inside cold or even still frozen. A convection oven on the other hand, cooks food thoroughly throughout, resulting in a better tasting, healthier food. A convection microwave doesn’t just heat – it can also effectively and easily roast, brown, broil and crisp food. Most models come with a heating or cooling option, which will allow any food to be cooked properly and to perfection.

If you are in a hurry, a convection microwave also tends to heat up your food more quickly – in fact, up to 20 percent less time than most other microwave ovens. They can also be used to keep food warm, unlike a regular microwave. And when it comes to that most hated of chores – cleaning – the convection microwave is certainly less hard work than a regular oven.

A convection microwave will give you the best of both worlds – the speed and efficiency of a microwave and the versatility and thoroughness of an oven.

Be In Control By Using Outdoor Security Cameras

Furniture To Set Up A New Office Or Home Office

The Basics of a Home Entertainment Room