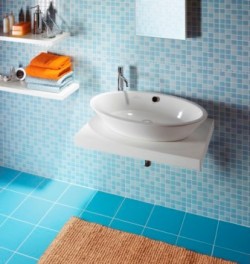 People often think that having small bathrooms is a disadvantage. Somehow, the ‘bigger is always better‘ mentality has thrived so fruitfully in our consciousness that people are so quick to judge. If you look around, though, ‘smaller’ has been racking up on advantage points lately. People generally prefer the smaller phone or tablet model and would pay more for it, although of course, following the trend, they’d prefer a smaller price (LOL). In the same way, small bathrooms should be viewed in the same light.

Small bathrooms are easier to maintain and design for because they have less area to worry about. As long as a bathroom doesn’t make you scrape your knees or elbows when you go to the toilet, your bathroom really isn’t that small. Also, with smaller bathrooms, you are sure to have a more organized space; it would be next to impossible to lose anything in such a neat environment. Can you imagine its implications with regard to bathroom tile laying? 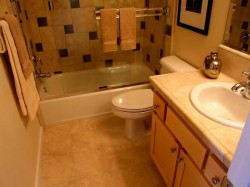 Smaller bathrooms are easier to tile and maintain

A smaller bathroom will be an easier space to tile because you have less area to cover, as opposed to a regular-sized bathroom with more floor space bigger wall size. You can also experiment with different styles in the case of small bathrooms because once you see that the design does not jive with the rest of the components, you can start over and proceed with another style. Having a bigger bathroom is just more effort and a harder time for design and maintaenance.

There are many different bathroom tile types that would work with small bathrooms. Your generic sized bathroom tiles would work, and you can choose the default color white, but why would you do that if you can opt for other styles that you want to experiment with? Instead of going with the norm, try something new and different. Pick your favorite color and use it as a tile face for your bathroom. For an extra zing, make sure to put border tiles on the top of your tile selection. It would be best if it has the same colors but with a distinct design to distinguish it as a border type of tile level. 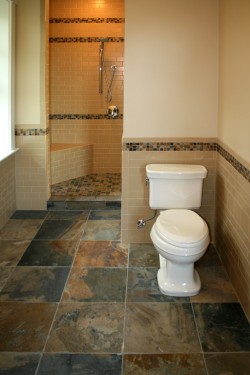 Sometimes the tiles make the bathroom, regardless of size

As an interior designer, it is quite expected of me to know a lot about the house. Despite my extensive knowledge in beautiful furniture and smart combinations, I must admit that I do not know how to lay down or set tiles. Personally, I believe that learning such a skill is very unnecessary, in lieu of the fact that you won’t be able to use it on a regular basis. If you did, you wouldn’t need to learn in it the first place. Instead of trying to pick up the mantle of tile laying to save money, I recommend for you to go with a professional instead to have expertly laid tiles, and more time for your budding career and beautiful family.

How a Mirrored Dresser Can Spice Up Your House

Which Doors To Use For Your Walk In Shower