The Effect of the Extra Long Shower Curtain to the Bathroom 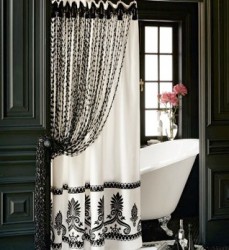 Curtains can give the room a certain feel. There is a certain elegance that comes with the flowing fabric hanging from the top end of an open window. They do more than just to dress up the windows and to have control over the rays of light coming in from the outdoors.

The curtains can create the illusion of movement against a concrete wall, giving the entire room more life as well. Not only are curtains used for maintaining privacy in the room but they have a significant decorative value to the room. Curtains draw attention and they make the room look more stylish one way or another.

As an enclosure the shower curtain is also installed for the purpose of keeping the water where it should belong. Although the bathroom deals with a lot of water, most parts of it like the cabinets, shelves, and other facilities found in the rest of the bathroom are not supposed to get wet.

There are different types of shower curtains and these curtains have been used even before the sliding shower doors or glass enclosures were invented. Even in ancient times people have used shower curtains to accessorize as well as maintain privacy in their bathing area.

Extra long shower curtains can make not just the bathing area but the entire bathroom look bigger and taller as well. The length of it creates sort of a margin that makes the illusion of a bigger bathroom where in the ceiling is far off from the floor and that there is more height in the room.

Having extra long shower curtains will create the elegant effect even on the simplest bathrooms. They will create the similar effect on the bathing area as they do on other rooms of the house.

What You Need to Know About Floor Pans for New Homes

Black Wallpaper Can Make A Room Makeover A Breeze