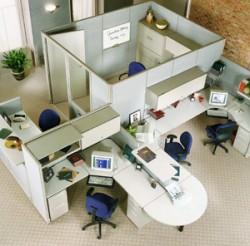 Saving space in the office with office cubicles

If there ever was an original interior design sin that every single human being has committed, it would be of wasting precious space. Such sinful commission may not come from the wanton, intentional, or deliberate desire to commit this sin, but sometimes interior designers such as myself can’t help but shake their heads in disapproval when referring to blatantly space-gluttonous set-ups.

This sentiment holds true especially in small office settings where everybody is even pressured to come up with satisfactory output. If you guys remember my friend Ethel who owns that cupcake business, you’d know that independent business owners do not have the luxury of owning spacious offices. As such, when she asked me about the plausibility of utilizing office cubicles in her office, I told her that, in sum, space saving should not stifle efficiency.

Implications of Cubicles for Office Use

What most independent business and office owners fail to realize is that giant desks from employees are a waste of space. If you think about it, a standard desk is long because there is space for drawers underneath beside where you put your chair in. If you were using a computer to tabulate worksheets, what would you need that extra surface area for? At the very least it would only be space for picture frames or flower vases.

If you use home office cubicles, you’ll have no need for large desks because the space will be compacted into an area that everyone is supposed to share in a partitioned manner. This would be especially advantageous if you decide to use cubicles from the get go and you haven’t purchased and sort of desks yet. Imagine all the money and space you can save if you made this fortuitous decision of buying cubicles first.

Modular office furniture cubicles make the most out of the space given because they are made for a particular area and include everything a worker might need for a work station including a surface desk, storage space, and ample area to move around move in. The last feature, though, may not be available for types of office cubicles for smaller areas. Imagine two large desks meant for chief executives – a whole four piece cubicle can take the place of these two desks put against each other.

The employee may also see the office cubicles as a good thing because he or she is given an ample amount of privacy due to the cubicles that divide the work space. Some people, after all, work better when left to their own devices because they feel relaxed enough to be efficient without being told off or monitored too keenly by their superiors. 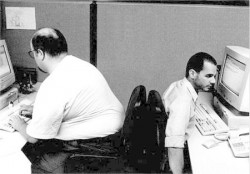 Small office cubicles may be bad for some employees

However, using small office cubicles also has its disadvantages and I warned Ethel about this. For one thing, if your employees turn out to be claustrophobic, you’d have a very big problem. People might not consider this as such but claustrophobic people are most of the in denial of their condition and would feign being alright although they are evidently fazed. As a result, you’d have a distracted employee with substandard output.

Another disadvantage would be if employees began abusing their privacy. In big corporate offices, workers in enclosed office cubicles are still monitored through CCTV and should always be trying to impress the boss with feats of typing or looking incredulously occupied with documents. For small offices however, CCTVs would only cost more and cubicles would prevent the boss from knowing whether the employees are actually working or only surfing social networking sites or even just taking a nap.

As such, I told Ethel to consider the amount of space to save vs. the amount work need to be done or that rate at which it needs to be accomplished. Office workstation cubicles, both either new or used, may be space savers indeed, but it also has some inherent loopholes which would cause problems in other aspects of the workspace. As are as Ethels’s employees go, she says that they are all trustworthy anyway.

This brings us to the other point of consideration when considering use of office cubicles – the welfare of the employees. Because independent businesses are usually composed of a small but dedicated workforce, business owners tend to feel affection for their employees similar to how one would feel for family. In other words, it’s really up to the boss.

Ethel makes her decision next week after considering my advice as well as other factors. What do you think she should choose for her office? Leave your comments below and don’t forget to follow us on Twitter and like us on Facebook.

Placement of a Large Bird Feeder Can Be Problematic

Is a Fitted Wardrobe Worth the Price?