Employing a Shower Base for Your Bathroom Shower Space 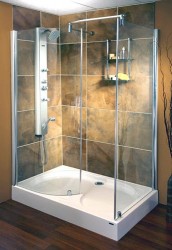 I take showers as often as possible because it makes me feel clean and refreshed. As such, you’d notice that I give special attention to my bathroom and actually spend for components that would make it look more aesthetically pleasing, as well as function better as a whole. It’s a good thing that I do interior design because my knowledge of how to manipulate furniture and fixtures for the home come in handy when I do my own decorating for my own home.

One thing I particularly grew fond of over the years was the concept of a wet room. Personally I like it because it adheres to minimalistic principles of interior design and at the same time is as functional as any other bathroom set up. A bathroom with a wet room looks nice, but only because proper shower bases are used to make the system work. Shower bases work not only for wet rooms but for other bathing setups as well.

A Good Shower Base Pan for a Good Bathroom

Shower bases are also known as shower trays in other country and they are basically just the foundation of shower that rests on the floor connecting your shower set up to the drainage. Shower bases are important especially for shower set-ups that would need a base to attach itself, such as shower stalls or kits. The shower trays that are so well known are those types that are pre-fabricated and can be store bought. The other type of shower base is the hand-tiled variant which requires manual assembly.

If you have a cast shower base installed for your shower set-up, you’d have a visually-appealing bathroom that would draw envy of your neighbors when you throw parties. I don’t mean to do it on purpose, but my neighbors often hate how beautiful my bathroom. I mean, not only is it beautiful but it’s also actually very functional. Taking a shower in my bathroom is a breeze and I don’t have to deal with any complicated drainage problems because of my prefabricated shower base. 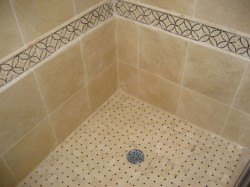 A prefabricated shower stall base is appropriate for shower set-ups like shower kits and shower stalls, just as I have mentioned earlier, because it comes and appears as a set. Manufacturers produce shower bases so that set ups such as the ones I have mentioned would have a stable base, apart from making it possible to attach add-ons to the base. You can of course choose to use prefabricated shower sets for other more “dynamic” shower sets but it would look a bit off. I mean, I have a friend who decided to use a prefabricated shower base for his wet room. It was a bit weird but it actually looked nice because the shower space was delineated from the rest of his bathroom.

Personally, I don’t see the point in using a prefabricated cast iron shower base for shower set up such as walk in showers or wet rooms. As we all know, walk in showers are shower set ups wherein the bather would merely have to walk through a covering made of a fiber glass or real glass sheet in order provide the bather with enough privacy while keeping the water from the shower head to sprinkled beyond the shower space. Wet rooms, on the other hand, are the simplest shower set up composed of only the shower head and the drain. The special nature of these shower set-ups requires a special type of solid shower base so that there would be unity with regard to appearance. If you used prefabricated shower bases, the floor in these shower set-ups would stand out but not in the good way. 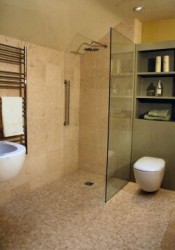 What to Remember When Choosing a Shower Pan Base

Still, there is nothing that would prevent good style from flourishing. If you wanted to use a prefabricated shower base corian on a walk in shower or a manually installed shower base for a shower kit, that would be your decision. Just remember to use your style sense in order to match good quality with actual aesthetic appeal. Your shower base must serve its purpose of linking your shower set up with the drainage, as well as appear visually stunning with the rest of your bathroom.

If you liked this article or if you have a funny story about shower bases, leave a comment in the comments section below. Maybe you can even share what you think about shower bases or give some insight on the ongoing battle between prefabricated shower bases and those manual variants. While you’re at it, don’t forget to add our Facebook page or follow us on Twitter.

How to Build a Shower Set Up for Your Home Bathroom

The Usefulness of Bathroom Medicine Cabinets with Mirrors