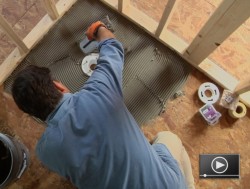 Building a shower set up requires a lot of consideration

I don’t know about you but personally I love taking a shower at least twice a day; before and after a long day. I love it so much that I have spent quite a handful on my shower set up. For me, taking a bath is a celebration, so you should invest on what type of shower set up you have. Don’t get me wrong, I also have a bathtub in my bathroom, but there’s just something empowering and invigorating about having a streaming torrent of water to wash away more than just bodily dirt. It’s a psychological thing I guess, but no one can deny how much more convenient and efficient it is to shower, not to mention more appropriate for days when you just really need to go as fast as possible.

So if you think that a standard shower model would fit everyone in the world uniformly, shame on you. As an interior designer, I believe that you can have more from your shower experience than just the mere act of bathing. You must realize that there’s the spectacle to consider, the look of the water as it sprays down from the shower head, not to mention how the shower set up as a whole looks when it is not in use.

How to Install a Shower Base and Other Shower Components

Installing a shower is pretty easy and straightforward. You just have to let the proper pipes run through the bathroom and connect your shower head at the appropriate height you want it to spew water from. The technicalities are laden with facts – how to connect the pipes, how to extend the pipes in case it falls short, how to cement over the pipes and how to lay tiles over the cemented pipeline. What I really want to discuss is how you install a shower set up and not just one single shower head.

You see, installing a shower head is easy, but putting up a whole shower station might be difficult for some people, especially if they don’t know what they want. Regardless of whatever extra you may want to put in your own shower set up, you have to remember the basics – a shower base, a water guard, shower shelves, and the type of shower head that you’d want to use for your shower set up. I believe that all these parts are basic because you need all of these for a properly functioning shower set up. 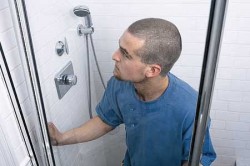 Never forget the basics when instsalling a shower

There are many types of shower head available in the market which suits different kinds of people. You have the standard shower head which is fixed and suspended from a regular height. Most homes come with a generic shower head such as this because it is the most common type of shower head. There is nothing wrong with having this type of shower head because it can serve is primary purpose of bathing people admirably, but some individuals just want more out of their bathing experience.

This is the reason why handheld showerheads are the craze nowadays, especially with the ladies. A handheld showerhead is like a hose wherein you can direct the flow of water by pointing the showerhead, which you hold, to the desired body part you want to wash. A normal handheld shower head can extend indefinitely to the far reaches of you shower area, and can even be mounted on the wall if one were so inclined to do so. 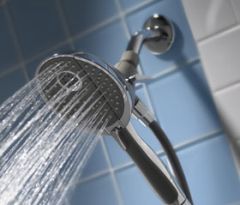 Shower heads are an intergral part of any shower set up

Personally, however, I still preferred a fixed type of shower head but I don’t really like the generic type. Only overhead showerheads will do because it is both functional and aesthetically pleasing. Most people won’t notice an overhead shower head because it is suspended from the ceiling and can come in different varieties. Some can have an obvious spout dangling from the ceiling while other can be just a tile with water holes for the water to sprout from.

I also like the fact that bathing with an overhead shower head is like bathing under the rain. It’s classy, elegant, stylish, and convenient – well, at least for me. I have a shower set up at home featuring an overhead shower head and I show it off to my friends and guests every time I have them over. Do you like overhead showerheads or would you prefer other types of shower heads? Leave a comment on the comments section below and tell me what you think. I’ll be waiting for your stories and kinds words. ;)

Get Ready For A Change of Lifestyle With Washable Rugs

The Significance of Learning How to Install a Bathroom Sink

The Effect of the Extra Long Shower Curtain to the Bathroom