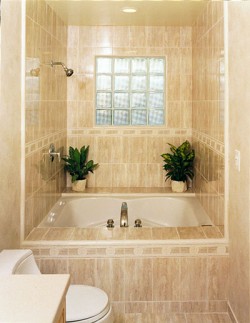 Remodeling, per se, is difficult business. Unlike interior design wherein you just move stuff around and alter the layout of a certain living space, remodeling requires that you reshape the living space itself. As such, this would entail, for the remodeler at least, knowledge of carpentry, plumbing, basic electric wiring, mastery of basic tools and lots of experience. Remodeling should only be done when absolutely necessary or when absolutely rich, either or.

When I mentioned changing the layout of spaces earlier, I was referring to normal rooms with normal furniture. Changing the layout of small bathrooms are more complicated, I’m afraid, since bathroom furniture are held in place by pipes and other plumbing. As such, when you remodel a small bathroom, you have to reroute the pipes in order to accommodate the flow in or out of water from the toilet, sink, shower or whatever it is you plan to move across the room.

If you really want to improve the look of your small bathroom, you should try what we in the industry call the rule of thirds. Instead of putting your bathroom components in equal spaces from each other, as is usually done by most people without aesthetic sense, put the your bathroom furniture in bunches and put these bunches as far away from each other as possible. Of course when I mean bunches, there has to be a comfortable amount of space to move around in. If you locate your sink too close to your toilet, you wouldn’t be able to properly use the throne. 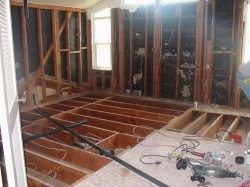 The logic behind this move is that there would appear to be more space in between. As such, the focuse of the room is shifted from just the whole set up to the spaciousness between the bathroom components. This provides for an illusion of space which is the point of most people in remodeling their bathrooms. It would also be convenient to know that since the bathroom space is not that big, the act of rerouting the pipes would not be that hard.

Another remodeling trick you can pull off in a small bathroom is installing a wall mirror. You see, a wall mirror reflects the other side of the bathroom, which thereby creates the illusion of space. As such, when you see the mirror, you are tricked of the actual size of the bathroom. Somehow, this trick crosses over with that of regular interior design folks, but of course you have to have someone who knows how to use power tools to install the wall mirror properly. 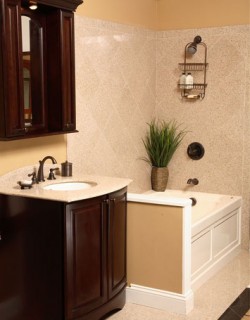 Remodeling small bathrooms are often unncessary; it is better to make do with what you have

Personally, I believe that having a small bathroom is not that bad since you will have less problems. You’ll have less space to clean and maintain, designing them is easy since you don’t have much space to cover, and you’ll always have neat and organized bathing implements since there’s not much room to scatter them all over on. The point is, if you want to remodel your small bathroom, it’s because you want to increase the size to a normal size bathroom. Remodeling a small bathroom but making it stay the same size is not really remodeling in the strictest sense of the word.

Walk in Tubs the Safe Alternative

When and Where Solar Shades Are Meant For In Your Home