More Compelling Reasons to Choose Twin Beds for Your Children 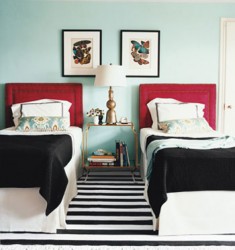 Twin beds for your children's bedroom

To the rest of the world, twin beds are referred to as single beds. They are smaller versions of double beds, which are meant for couples or people sharing a single sleeping space. Conversely, twin beds are perfect for twins or siblings sleeping together in the same room but on separate beds, enabling them to spend quality time near each other while giving them ample space apart.

Although I didn’t get to have my own twin, I was lucky to have twins for daughters. I bought them their twin beds and, to this very day, pride myself in making such a good decision. Twin beds are perfect for growing children because it is just the right size, as well as style. I daresay that I have not seen a cuter spectacle than my daughters’ twin beds, especially when they are tucked in and sleeping soundly on them.

Twin beds are crafted perfectly for young and growing children because they fit just right. Contrary to common misconceptions that bigger sleeping areas are always better, people who sleep on oversized beds actually tend to overstretch themselves over the large sleeping expanse and end up losing sleep due to seemingly unexplainable causes. If I know a thing or two about children from years of parenting, it’s that they love to sleep in cozy surroundings with stuffed toys and pillows, not in wide open spaces.

Also, twin beds are more reasonable for children because it will fit their rooms better. If your children shared rooms and had double beds each, there would be a lack of space in the room to move around on. Other people would tell you to get bunk beds, but I personally do not see the sense in exposing your children to unnecessary danger. Just think of what would happen if your child falls from the top bunk accidentally while sleeping. If I were you, I’d stick with twin beds.

The fact that most twin beds are cheaper than other kinds of beds is only incidental, since they are smaller than most bed types. However, you can still indulge in expensive twin bed variants that have special features such underbed storage and the like.

A World of Designs

Don’t get me wrong though. Twin beds are not just specifically made for young female twins. While pink and white beds may look good for my daughters in their room, bed manufacturers also produce other types of twin beds with varying designs and colors. There are dark colored twin beds with striking lines made especially for boys, as well as handsome wood finished twin beds for fraternal twins and normal siblings alike. You can also rest assured that twin beds made in the United States are durable and long lasting because of the quality materials used and skilled workers employed for the job.

I believe that our children deserve the best quality of whatever we give them. That’s why I think that purchasing them orthopedic mattresses and single bed bedding sets would complement their twin beds. For starters, try ordering the South Shore Furniture Cosmos Collection Twin Bed from Amazon, now with more storage space below.

Decorate Your Patio Or Deck With Stylish Outdoor Pillows