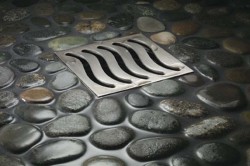 The shower drain is a plumbing fixtures that carries the waste water from your shower to the sewage pipe. A shower drain is different from a bathtub drain because it does not have a blocking system that can close the drain and prevent the water from being carried away. Installing a shower drain involves choosing the right kind of drain according to what kind of sewage pipe the plumbing of your home employs.

The Importance of a Shower Drain

Every shower drain has an important job which is to drain away all the waste water from your shower and carry it to the sewage pipe while preventing the backflow of water or any leakage in gases that might exist in your sewage pipe. A shower drain should be free of blockage and correctly installed for it to do its job properly. This is why it is important to get the right kind of shower drain for your bathroom.

The Parts of a Shower Drain

There are four parts to one shower drain: the grid, the strainer, the vent and the trap. Each of these parts have their individual important functions, each of which contributes to the overall performance of the drain.

The grid is the part of the shower drain that you can visibly see. It has an arrangement of holes to allow the free flow of water and block the draining away of larger objects in your bathroom. The grid collects the water by being placed at a slightly lower position than the rest of your bathroom floor, which is generally very slightly sloping.

The strainer is placed just below the grid, It prevents objects from the waste pipe from coming up the drain – and it also prevents solid materials that have somehow got through the grid from clogging up the waste pipe.

The air pressure that is required for the correct flow of water in this drainage system is provided by a pipe called the vent.

The trap functions exactly as its name describes. It is a trap for sewage gases so that they do not escape up the drain and enter the bathroom.

For a shower drain to function properly, all these parts must be present and in working condition. It is sometimes necessary to regularly clean out your drain in order to prevent blockages. Many substances especially large quantities of hair that has gathered over long periods of time, can successfully clog a drain and prevent it from working properly.

How to Match Your Bathroom Curtains

How to Replace a Bathtub for Your Home Bathroom