Try a Change in Bathing Ambiance with the Japanese Soaking Tub 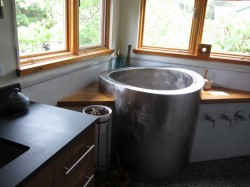 The Japanese culture among other Asian cultures is one of those I sincerely admire. Even with the advancement of their technology they have kept with them throughout changing years, their culture and tradition. I truly believed that it paid off for them to keep who they truly are despite the influence of modernization.

However in other aspects it is not the Japanese who were influenced. There are also certain things that Japan has influenced the world. I don’t even mean robots or modern technology. Long before Japan made robots, they have come up with a technology for another basic yet essential aspect of life which is bathing.

Yes, Japan has even influenced the rest of the world with the design of its soaking tubs. And so now we have the spas of today. I’m not saying that Japan is the sole contributor for the spa phenom, there are other inspirations from other countries as well. But then again, the Japanese soaking tub has gained much attention and fame that the manufacturers of today’s tubs create their own line of the Japanese tubs.

It’s great for people who have small bathrooms but are still going for a spa like bathing area. Add a few scented candles plus soothing bath wash into the soaking tub and you’re on your way to your very own spa experience. The best part is you can do this every end of the day when all you’ve done that day hits you tired most. Whoever said that only the classic bath tubs are the only ones you can relax in must have never had a soak in a Japanese tub.

Well, of course I still go to spas for the monthly facial and the massage but the spa can’t always be there for you –or maybe it’s the other way around. I can’t always be in the spa whenever I want to. So how else can I get the spa comfort after a hard day’s work?

Let’s face it, the Japanese soaking tub is what it is, it’s a soaking tub not the typical bath tub. It’s not as long and it’s not meant to be bathed in lying down. However it can still be just as comfortable. It’s style and comfort in a tub that I would always describe as cute and just right.

Today there are other types of Japanese soaking tubs other than the traditional wooden ones. There are copper tubs, acrylic, stainless steel, and even cast iron tubs. They came in different shapes that give your bathing area a more unique look. Go to signaturehardware.com and choose the Japanese soaking tub that’s right for you.

There Are Lots Of Shower Curtain Rod Types

Using mirrors to increase the perceived size of your home

How to Soundproof Your Bathroom Walls